There have been many versions and nuances of the idea that there may in fact be an in­timate relationship between madness and civilization; that civ­ilization itself is bound to growing exi­sten­tial challenges and an escala­ting inner chaos: Marx’s alienation; Durkheim’s anomie; Weber’s iron cage and disenchantment; Fr­eud’s idea that civilization forces us to lock up sexual and aggr­essive urges, which leads us to lives of per­petual neurosis and dis­content; Fro­mm’s idea that technological pro­gress makes the sane soc­iety increa­singly difficult to achi­e­ve, which results in an escape from free­dom; Foucault’s idea that “madness” is itself an inven­tion of the mod­ern mind, the purpose of which is to sweep its own dark side under the rug (hence his 1964 book title Mad­ness and Civili­zation); Habermas’ fragmen­tation of life and coloni­zat­ion of the life­world by the “system”; Deleuze and Guatt­ari’s deterritorial­iz­ation; Sennett’s cor­rosion of charac­ter—and many others.

The following is a slightly edited extract from Hanzi Freinacht’s book ‘Nordic Ideology: A Metamodern Guide to Politics, Book Two’. This is the second book in a series on metamodern thought, a work of popular philosophy that investigates the nature of psychological development and its political implications.

In recent years it has become abun­dantly clear that there is a rising problem of mental health issues among adole­scents and young adults in the most advanced econom­ies of the world—even as crime and alcohol use generally have de­creased. We become civilized and we subtly go batshit crazy.

Of course, there are many aspects of this intimate connection be­tween madness and civilization. I would suggest that the role of Existential Poli­tics is to grapple this complex relationship, not only as a matter of “psych­iatric care” and “mental health”, but as a fundamental issue involving all of us—so as to curb the lingering madness of everyday life itself. And what a daun­ting task that is.

We’re not look­ing only at the tip of the iceberg, so to speak, but at the entirety of a mostly subsumed mountain of ice. Our relatively innocent little neuroses, our innocuous inner grueling, our bitter silent compari­sons with the for­tunes of others—all of these realities are continuous not only with the pre­valence of serious psychiatric illness and cases of social drud­gery, but also with the games of everyday life and the workings of the economy and politics.

What is it that puts more and more of us, and increasingly often, face to face with madness? On a more general level of analysis, I would argue, it is not so much “civilization” or “modernity”, as the classics suggest, nor “the post­mod­ern condition” or a variety thereof, as the analysts of today assert. Rather, it is the staggering increase of complexity itself. As society becomes so much more complex, so quickly, it simply becomes more diff­icult for the mind to reach a some­what stable “local maximum” or “equili­bri­um”. It’s just more difficult to know who I am, what’s right and wrong, and what’s really real in the first place. Even as we are richer and more secure than earlier generations, there are also countless social and psy­ch­ological adapt­ations that have to be made, and the problems we do have are less tangible and direct. I’ve said it before, and I’ll say it again: We’re not built for this kind of complexity. The rewards are too great, the im­mediate gratifications too readily avail­able, the threats too nebulous, the world and its horizons too vast. The mysterious relationship between mad­ness and civiliza­tion has a name: increasing com­plexity. Late at night we wake up and face the creep­ing horror: that life itself as we know it is a social con­struction, one that ultimately cannot be real, only a fragment on top of an infinite abyss.

And handling greater complexity in the world requires not only new ideas; it requires a kind of spiritual development of the average person. It should hence be a societal goal to develop not only higher subjective states in each of us, but also to help more of us dev­elop and integrate greater inner depths, and—if possible—to develop our abil­ity to think more abs­tract thoughts, to cognitively grasp and relate to more complex realities. This can be described in the following graph: 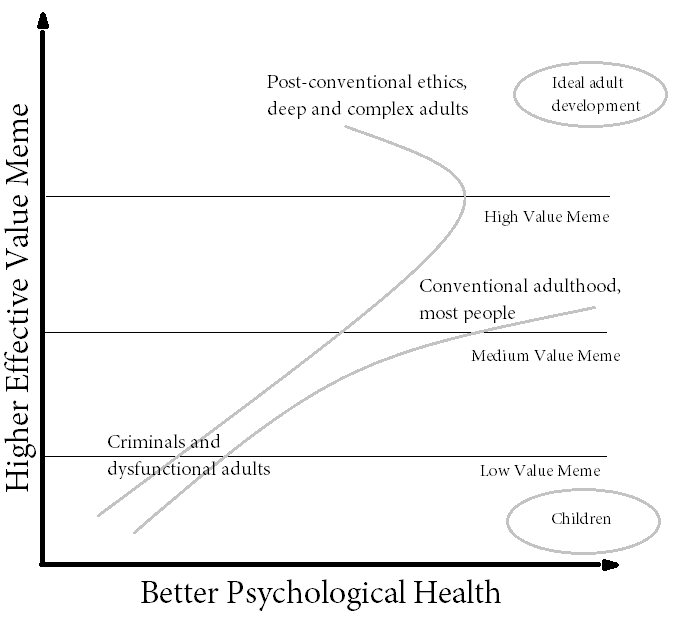 The graph may need some further explanation. It is a summary of the develop­mental traits of a general population, with higher value meme (the inter­section of cognitive complexity, code, state and depth) on the vertical axis and “better psychological health” on the horizontal axis. “Psycholo­gical health” can here be understood not only as the absence of psych­iatric diag­noses and mental illness but also one’s general wellbeing and the fresh­ness and integrity of one’s mind overall. If you like, you can imagine one axis as one’s “stage” and the other as an agglomerate of how well you have man­aged to pass through the Eriksonian life phases you have thus far been through (did your mother treat you kindly, did you make friends as a six-year-old, did you form an identity as a teenager and so forth).

As you can see, in this admittedly sche­matic graph, many or most chil­dren have low effective value meme but relatively “good” psychological health. Of cour­se, children also have mental health problems, but at least infants have less of them and young children have much lower rates than e.g. young adults. In childhood, there’s often that directness or freshness of experience that in some primary sense is “healthy”.

Be­tween the two grey lines on the graph you find most adults. The great­est number of people develop to “con­ventional adulthood”, which means some loss in mental health as com­pared to the aliveness and sim­plicity of childhood, but the achievement of an average value meme and stage of dev­elopment (e.g. the Modern value meme). A minority have their dev­elopment stun­ted and remain at low value memes while their men­tal health det­eriorates—and that’s where you find many or most dys­func­tional and criminal people. Up until the development of conven­tional sta­ges, people’s value memes seem to largely follow the psycho­logical health and func­tionality of a person: it’s just difficult to become a reason­able per­son who internalizes the norms of society if you feel too bitter, confused or miser­able and your social relations and habits are a mess.

High value meme is to some extent also tied to mental imbalance and dysfunctionality. A minority of adults develop to higher value memes (e.g. Post­modern and Metamodern) but must thereby also face greater inner obst­acles. Many of those who develop exceptionally high com­plexity and great depth have minds oscillating in “far from equilibrium states”. I don’t have the data to prove it, but just by looking around my own circle and the people who respond to metamodernism, there is a striking pat­tern: very high intel­ligence, Mensa-level is standard, very high preva­lence of ADD and ADHD, some autism (especially among the most gifted), dys­lexia, very high pre­valence of depression, some people who have very extreme pers­on­alities if not necessarily diagnosable, high preva­lence of strong spiritual exper­i­ences, high prevalence of psychedelic expe­riences, high prevalence of psychotic break­downs and so forth. In my own family, there is schizop­hrenia, epil­epsy, depression, anxiety and chronic pain due to nerve diseases just as there are highly intelli­gent and creative people. And among post-conventional thinkers you find lots of gay people and folks with non-binary gender identities and polyamorous lifestyles, how­ever that fits in.

You get the point, right? There seems to be a patt­ern here: exceptio­nally high value meme seems to correlate with a lower level of mental health and stability, and in some sense “unusual minds” or atypical neuro­log­ical structures. If you look at the bio­graphies of spirit­ual mas­ters, like Jiddu Krishna­murti and Eckhart Tolle, a similar pattern appears. Before their “awaken­ings” to recurring higher states, these people went through ex­tre­me inner turmoil—the edge of madness.

As my friend Nick Duffell has argued in his studies of British elite board­ing schools, each society and subgroup have their own “psy­cho­history”, a collection of social conditions that affect the psychological deve­lop­ment and personalities of the group.[1] In sociology, similar argu­ments have been made, not least in the study of generations (from Karl Mannheim and on­wards) and “cultural trauma” (Jeffrey C. Alexander).[2]

Different demographics seem to have specific psychohistories, and the generative conditions for people’s life-shaping events can be affected. There appear to be social and gen­etic factors that cause the high value meme folks to also have greater mental vulnerability. I don’t pretend to understand the in­tricacies of this relation­ship, but I do believe the rela­tion­ship is factual. The “most civil­ized” people, in a sense, tend to be sligh­tly bonkers.

If this is correct, the conclusion should be clear: We need a society that helps more of us to marry high effective value meme to inner peace and stability, to mental health. In some few select people, you have the marr­iage of exceptional development with childlike purity of experience, mind and emotions. This, of course, is what society can and should strive to support, knowing fully well this is a tricky ride: A more complex civiliza­tion re­quires higher effective value memes, which seem to require greater inner obstacles to be surmounted, which is married to a greater propen­sity for losing grip on reality.

The only hope for civilization is found, thus, on the brink of madness. Think about it: informed naivety, magical realism, the crossroads between fact and fiction, the transpersonal perspective, the hall of mirrors, sincere irony—doesn’t it all reflect the madness of a psychotic episode? When we open up reality to be co-created in a transpersonal space, is this not an act of enlightened madness?

What kind of person can dive into madness and come out a deeper and more complex thinker? The kind of person we need. The metamodern mind, ideally speaking. Applied Existential Politics should support the spon­taneous em­er­­gence of high­­er subjective states and greater existen­tial depths in the population as well as a greater psychological robust­ness.

The acceleration of the developing world-system is a dizzying ride. As new and increasingly phantasmagoric and bizarre and sub­tle and compli­cated and mind-blowing phenomena press themselves upon us, life be­com­es a rollercoaster of greater heights—even touching the stars—and deeper valleys as nightmares crawl through the television screens and enter our living rooms. Not to mention social media and smart­phones hi­jacking our limited attention spans. Subtler and more multidi­men­­sional games are played for higher spiritual stakes. More of us try to surf the waves of this madness, in the service of higher ideals. Those of us who try psyche­delic drugs less often do so in the context of Dionysian “partying” and more often as serious Apoll­onian “soul-sear­ch­ing”.

Something lurks at the back of our minds. And we wake up at night. And the ground shakes and our heads spin and the skies crack open. Utter and profound confusion. Even a scent of madness; but also an opportuni­ty to change our socially constructed universe, to shift our maps of mean­ing.

The question is, rather, how to create a society where a suffi­cient num­ber of us dev­elop the resilience to hold on during this crazy ride. That’s why we need an ongoing process that supports the development of higher states and the succ­essful integration of greater inner depths. This process serves to cult­ivate an awakened public.

Messieurs dames—let’s give a warm welcoming hand for Existential Pol­itics.

[2]. Alexander, J., C., 2003. “On the Social Construction of Moral Universals: The ‘Holocaust’ from War Crime to Trauma Drama”, in The Meanings of Social Life: A Cultural Sociology, New York: Oxford University Press, pp. 27–84.