In the last post we briefly introduced the economic thinking of the Alt-Left. In this one we take a look at some general political intuitions and stances that set the Alt-Left apart from the Old Left. This includes some rather sensitive topics in which our friends on the Left tend to react emotionally. Can you keep your cool and read all the way through?

The central issue here is that we are shifting from a “resistance stance” in which the Left is seen as reason and morality resisting the unjust structures of the world knowing that “another world is possible”, to a developmental stance, in which the mission is to improve upon the many faulty processes that constitute the world order. Basically, the Alt-Left doesn’t believe that you can tear down the existing order to find gold glittering underneath. Instead you must engineer better social, economic and political processes that – over time, and on average – lead to dramatically different results. This stance is no less rebellious than that of the traditional Left, because the transformations proposed are indeed very radical and difficult to achieve. But it does grant us a more concrete and direct program for change, something to do.

Let’s take a look at some of the distinctions: 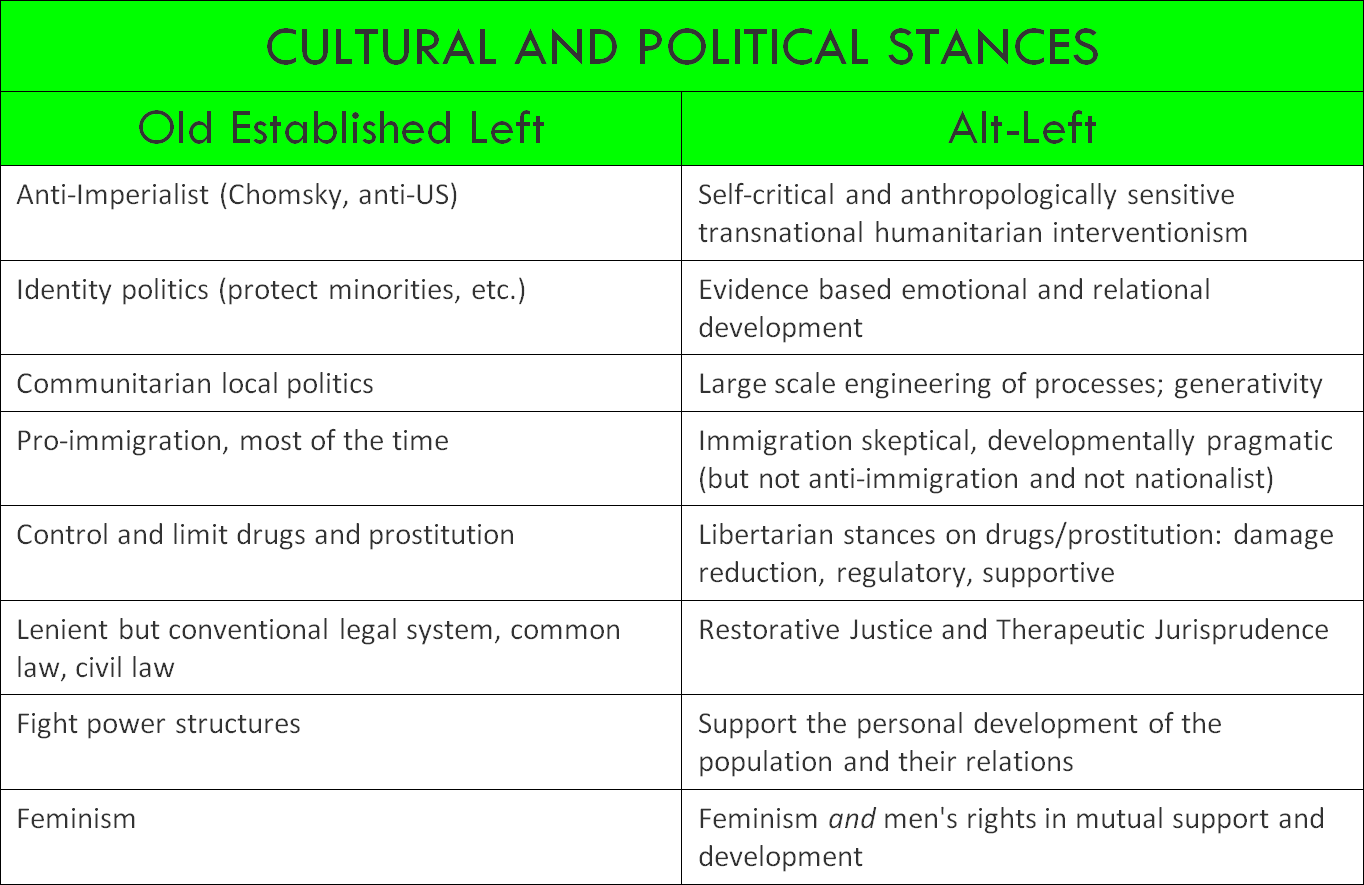 Can you see how a developmental perspective is the common thread? For instance, following Chomsky’s anti-imperialism is good for pointing out some of the crimes committed by the US in its foreign policy, but it largely leaves us wondering what should come in its stead. Should the international community and democratic countries always refrain from the messy business of intervening in conflicts and humanitarian crises? The issue here is to develop the rationale, transparency, accountability and overall quality of international interventions. This would require the military forces to become much more civilian, much more anthropologically sensitive. You would require a system that curbs misuses of military power, but still allows for necessary humanitarian interventions to take place, and that works in tandem with local cultures, economies and languages. This is a more tenable and world-centric position, one that extends solidarity to all humans.

The same is the case with identity politics. The matter is less to protect minorities from appropriation and to make words taboo, and more to develop the overall psychological security, communication skills and quality of relations within the populations. An important reason that people are so racist and prejudiced in the first place is that they have feelings of frustrations and feel insecure. Likewise, a major reason that many of us are especially vulnerable to the discrimination of others is that they feel a lack of personal and cultural recognition. If people are generally better at giving, receiving and understanding such recognition – and feel that they can afford to lend their recognition more generously – this will make such issues less hurtful to many people. Research has shown that prejudice is closely tied with the level of personal development that people have attained: more psychologically developed people who have more of their inner needs met are less likely to be prejudiced. So the Alt-Left puts larger emphasis on these deeper issues. If you don’t feel the need to cling to a certain identity (national, ethnic or class) you are generally more open-minded. This is behavioral science. And people can develop.

All of this of course requires planned efforts resting on rigid science and continuous evaluation, which is why it cannot be primarily up to the grassroots communitarianism. It simply requires too much understanding of social science to spontaneously crop up by itself: how to devise schools that generate greater personal development, etc. Hence, the governmental level of governance must also be involved, together with the international community of scholars. This is why the Alt-Left generally works at that level, even while being sympathetic and sensitive towards the profound social value that can be generated at the community level involvement. But even so, there needs to be institutions and social environments that help such experimental zones to grow and multiply. This has been fruitfully discussed by the legal theorist Roberto Unger.

The same developmental perspective is applied to global migration. The (correct) moral intuition of the Left is that people should have the right to settle where they please, and that resistance to immigration in rich countries is often an expression of racism and defense of the interests of local people. The Alt-Left position is to view global migration in its current form as a broken system that hurts a lot of people and creates pockets of low social sustainability – the often disenfranchised children of refugees in rich countries. The Alt-Left position holds that this situation cannot be remedied only by curbing racism and discrimination within the rich countries, but that a truly transnational order of migration must be put into place. This system must respect the fears and misgivings that people have about migration in its current form and seek to establish sustainable levels of migration. Because the acceptance of refugees is often an expensive affair that pulls resources from foreign aid, it would make more sense for receiver countries to actively accept refugees close to their homes – and fly them to the host country. This would make possible a more rational prioritizing of the most vulnerable groups, curb the human smuggling industry, and make possible the pooling of greater resources to aid in the zones where people are most vulnerable. It would also be much easier to find public support and fewer fears would be there to be played upon by rightwing populists. Long story, this one. Let us return to it again in future posts.

Likewise, a developmental perspective is applied to the global system of prostitution and drugs. Amnesty International recently adopted a policy recommendation for decriminalization of prostitution. The Swedish model of criminalizing the Johns only is an interesting case study, but it still forces the prostitution to be part of the illegal economy and hence hinders organization of labor rights, protective legislation and so forth. Again, the overall suffering of these groups in society may be better served by an overall increase in gender equality, social security and transparency. Applied correctly, this may work against human trafficking. A corresponding approach to drugs and narcotics holds that the drugs aren’t going away, so that the best path ahead is to legalize, regulate and make transparent the market – which lowers global crime and increases the opportunities for damage reduction and help with addiction. Also, long story. All this feeds into the larger legal paradigms of restorative justice and therapeutic jurisprudence – i.e. that the legal system should be geared towards reducing suffering and repairing social relations according to best evidence based practices.

The issue, then, is not to fight the power structures, so much as to consciously and actively guide the overall development of human lives and relations. This perspective extends to gender equality, in which the Alt-Left leaves behind the antagonistic forms of feminism (“crush patriarchy!” etc.) in favor of a stance in which women’s, men’s and LGBT issues are all taken into account and taken seriously. The idea here is that you can improve upon the general quality of sexual, family and gender relations by addressing these issues in tandem with one another, rather than in opposition to one another. If we, for instance, leave out men’s issues, we leave out crucial parts of the behavioral equations that mess up people’s lives. Hence, an inclusive and progressive gender politics must see how these different perspectives of life – and their respective sufferings – can often overlap. A very important tool for this end is a widely expanded sexual education of the general population. Again, it’s a multiperspectival developmental issue. Touchy subject, this one. You can read more in this post.

That’s all for now. Stay tuned for more Alt-Left perspectives.