This first and most obvious form of inequality in our days revolves aro­und income, wealth and access to material resources; the ability to acquire goods and services from others. Because material wealth has long been the main focus of struggles for equality, it merits less discussion here. It is, of course, no less important. For instance, it is perhaps the single most wide­ly accepted finding within social science that greater eco­nomic inequ­ality (often measured by the so called “Gini coefficient”) has a solid corre­lation with violent crime, much more so than poverty in itself, and that lower economic inequality is conducive to stability, social trust and a higher qu­ality of life in society at large.

The following is a slightly edited extract from Hanzi Freinacht’s book ‘Nordic Ideology: A Metamodern Guide to Politics, Book Two’. This is the second book in a series on metamodern thought, a work of popular philosophy that investigates the nature of psychological development and its political implications. This is the first post in a series on six forms of inequality. In the green box to the right, you can find the links to the full series.

There is, in the public debate, considerable confusion regarding the ques­tion whether economic inequality has been rising or falling during recent decades. On the Left, the idea that inequality is rising remains an almost religious tenet. A famous 2013 book by Thomas Piketty, Capi­tal in the Twenty-First Century, showed that a small group—the “top one per­cent”—has been amassing an increasingly larger portion of the wealth sin­ce the turn to neo-liberal economic pol­icies, begin­ning with the Rea­gan-Thatcher era around 1980, and that this is larg­ely a global trend. This trend is much more pronounced if you look at the top 0.01%, which has led many to believe that rising econo­mic inequal­ity is an uncontroversial fact. But there is more to the story as so often is the case with these things.

We are witnessing a few interrelated trends that have to do with econ­omic globalization, the lack of transnational governance, rapid economic growth and techno­logical advancement. These factors taken together cre­a­te a more complex picture. Let’s take a look:

You can see it all summed up in this one graph, taken from Our World in Data:[ii] 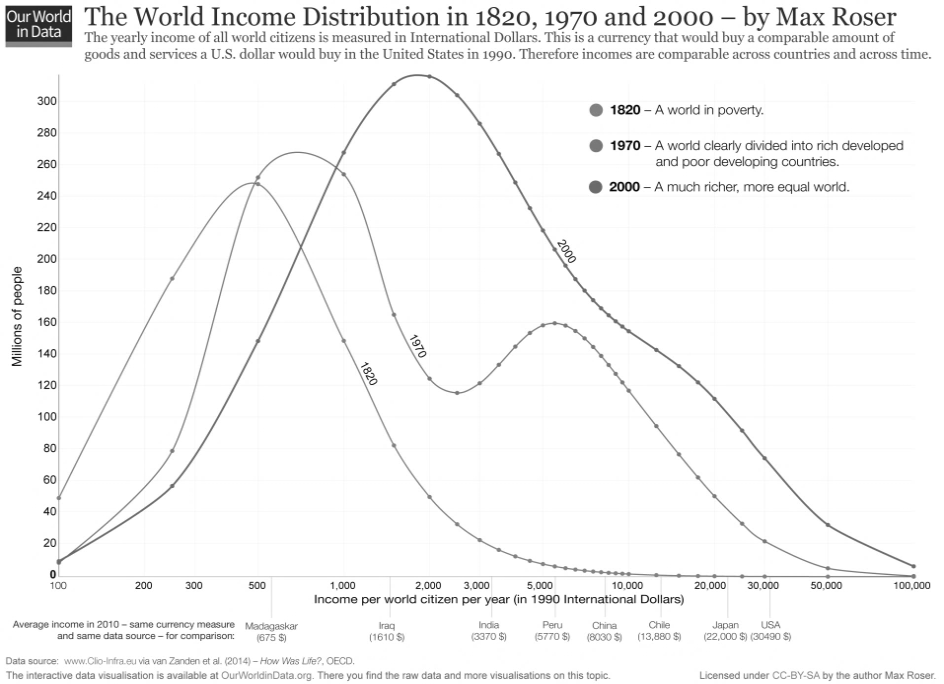 You can see how, in 1970, there were a rich world and a poor one (the two bumps on the 1970 distribution). By 2000, however, this had changed into one large, even global, pyramid with more peo­ple at the top and fewer at the very bottom. The rich countries no longer offer the same “buffer” against in­equality within their borders—now we are all part of the same competitive mega-structure that is the global market.[i]

Which conclusions can be drawn from this analysis? An obvious one is that inequality is increasingly a global issue, and thus more of a transnati­onal con­cern than a national one. This means that economic inequality—for all its importance and for all of its harmful effects—cannot readily be tack­­­led by means of classical Left economics of redistribution within the singular state. If you raise the taxes and redistribute wealth too vigorously within one country, this does not only necessitate the exclusion of foreig­n­ers, but it also scares away global capital. Hence, we need effective global systems of redistrib­ution. In order to reach a point where serious global redistrib­ution is possi­ble, we would require a larger systemic shift to­wards global govern­ance.

And to get there we need significant proportions of post­modern and metamodern people around the world. And these peo­ple only show up in significant numbers within the postindustrial stra­ta of the world eco­nomy, which makes any prospect of establishing such a world order un­achievable for the foreseeable future as it won’t be possible without vit­al economies such as China and India.

This is not to say that income redistribution is futile: Stronger econ­om­ies with functional institutions can still perform relatively extensive such meas­ures. But redistribution by means of taxes and social security is just not sufficient to counter the extremely powerful trends that drive the world economy: globalization, non-random network effects, techn­ol­ogical adv­an­cements and unregulated transnational mark­ets. How­­ever, as I will discuss in the following posts, there are other ways to decrease the viscerally felt ine­quality between human beings. In fact, I would argue, that an exagg­erated focus on economic inequality leaves us with an im­pov­erished vis­ion of what equality really is.

[i]. “The middle three quintiles (i.e. excluding the top and bottom 20%) in terms of country incomes could be responsible for 57% of global GDP in PPP terms, up from only 31% [in 2008] (and climb from 15% to 43% in USD terms). This group, which will be dominated by a subset of the BRICs and N11 (China, India, Brazil, Egypt, Philippines, Indonesia, Iran, Mexico, Vietnam) will matter more and more for global spending patterns.”