In larger and more com­plex societies, people seem to develop more individualized per­son­alities, values and world­views, not less. Or to be more specific and analytically correct, we could say that peo­ple in more complex societies develop more dividualized selves (borro­wing the term “dividual” from Gilles Deleuze, which replaces the “individual”). An important aspect of this is that people develop into higher value memes and, despite their apparent individualism, also seem to develop more universalistic, inclusive and non-sectarian values. The people of welfare-jacked Sweden display much higher average value memes than their Afghani fellow world citizens. You will, for instance, find more environmentalists and animal rights activists in Sweden than in Afghanistan. This is due to the dynamic, dialectical and painful dance between two poles: (in)div­id­uation and integration, an idea that has been pro­posed—albeit in simpler forms—by many theorists.

The following is a slightly edited extract from Hanzi Freinacht’s book ‘Nordic Ideology: A Metamodern Guide to Politics, Book Two’. This is the second book in a series on metamodern thought, a work of popular philosophy that investigates the nature of psychological development and its political implications.

“It is often our highest hopes and dreams, the parts of ourselves that are most uni­ver­sal and most intim­ately held and cherished, that are not seen, heard, given recognition and successfully integrated into society.”


The classical sociol­ogist Émile Durkheim fam­ou­s­ly observed that modern society pro­gresses by increa­sing the different­iation of the division of labor, which in turn makes each person work with more and more individualized tasks, hence developing more unique skills and experiences. These unique contributi­ons are then integrated with each other in a more refined eco­nomy. Acc­ordingly, this was an analysis of what Durkheim called “diff­er­­­entiation” and inte­gra­tion.

Erich Fromm, the 20th century social psych­ologist, argued that the dev­elopment of human personalities evolve as each person finds an individu­al path and relationship to life, which in turn always reasserts more uni­versalistic values and strivings. Fromm used the word “individuati­on”—but since I believe in the “divi­dual” rather than the “individual” I’ll stick with “divi­duation”.

You can find a corres­ponding idea in classical Amer­ican theor­ists of social psych­ology and education, such as George Herbert Mead and John Dewey. And, of course, you find similar theories in contemporary social philosophers like Jürgen Habermas and Axel Honneth. And all over phi­lo­sophy, really. And there are even versions of it in complexity and sys­tems’ science.

I would like to offer a similar but distinct bid for this theory, one that relates more closely to the pre­sent theory of the increasing intimacy of control and history’s developmental direction—a theory of “dividuation” and integration.

The idea here is, again, that richer, larger and more complex societies offer much greater opportunities for people to develop unique exper­ien­ces, skills, ideas, relationships and perspectives. Societies that integrate larger quantities of human activities, natural resources and flows of infor­mation create fertile soil for the growth of a myriad of human perspectives and exp­er­iences. Greater economic and social integration spur higher dividua­tion: People are find­ing and re­casting their “selves” and their rela­tion to life on new, higher and more subtle levels.

The tragedy of the matter is that this increasing dividuation also en­tails a corresponding difficulty for each of these unique souls to find ways to really match their inner drives, hopes, motives, ethics, skills and distin­ctive gifts with the world around them. If you identify as a farmer, a family mem­ber and a good Christian, these identities are relati­vely simple to act upon and it is rather easy to have them accommo­dated by your social surr­oun­dings. If you instead become a vegan whose greatest talent is to write poetry and criticize soc­iety, your family members and collea­gues are less likely to be as accomm­odating.

It is often our highest hopes and dreams, the parts of ourselves that are most uni­ver­sal and most intim­ately held and cherished, that are not seen, heard, given recognition and successfully integrated into society. Hence, more and more people simply feel alienated. It is not really that the world has become a colder, lonelier place. It’s just that the integration of these many unique souls is a more complicated and difficult matter. Be­cause people have come farther in their dividuation, more people also feel estra­nged, lonely and subtly dissatisfied.

As alienated and highly dividuated people we naturally struggle to find new social settings and environments in which we can truly “be our­selves”—hence the obsession with this imperative in today’s culture. Sometimes we are at least partly successful in these strivings and feel we have “finally found a home”: in a particular social network of like­minded activists, in the expressions of certain forms of music, anti-establishment sub-cultures, more personally sensitive forms of business management and so on. We find ways to re­int­e­g­r­a­te our new selves into corresponding­ly new social settings. But by doing so, we have again increased the inte­gration of society. We end up creating new and even subtler forms of opp­ression. From there on, we can d­iv­id­uate even further, starting the painful cycle again: Our new homes help us grow, but even­tually we may outgrow them and end up demanding even more delicate forms of integration.

Modern society, for all its mechanisms of intimate control, has produ­ced more highly dividuated people than any former society. And, as a re­sult, you have a whole army of sensitive souls who feel unseen and mis­under­stood. Society as a whole becomes increasingly emotionally sensitive and in great­er need of more subtle, profound and complex forms of social inte­gration. When such integration fails, life feels empty and meaningless. The road to greater freedom and higher development of the self is a beau­tiful—but also tragic and ultimately very lonely—journey.

As such, modern society suffers from a chronic lack of deeper and more com­­­plex forms of integration. Societal development spurs the growth into high­er stages of personal development, but higher stages of develop­ment create an increasing pressure upon society to break the prevailing alien­ation.

But—and this is a big but—every attempt to create more intimate in­te­gration risks becoming a new source of oppression. Whenever peo­ple try to relate to one another at a deeper and more intimate level, inclu­ding larger parts of our authentic emotions and inner selves, to some it may become suffocating and pressuring.

New oppression—albeit on a higher, subtler level. When we, for instan­ce, create new playful ways of org­anizing our corp­orations, in which every­one is invited to par­take more authentically, we also share larger parts of our inner selves and are expected to show up more “fully” and to be more emotion­ally invol­ved. But some are bound to not quite “feel it” and will necessarily feel pressured and subtly mani­pul­ated. When we create greater social eng­ag­e­ment and caring, those who are unable to ex­perience the same emo­tions feel suffocated and that unrealistic expect­ations are being shoved down their throats.

New oppression. When we democratize governance and more people get involved in decision-making, many of us feel stuck in endless discuss­ions. When we introduce mind­fulness and yoga at work, some will feel they are exp­ected to waste their precious time with mean­ingless woo-woo. When we make our organizations more pers­onal, some of us feel stuck in more personal issues and conflicts in which our vulnerabi­lities become all too apparent. When we create grea­ter tran­spar­ency, some feel more sur­veilled.

New oppression. When we use “nud­ging” to promote sustainable and prosocial behavior, some will feel that others are pulling their strings. When soc­iety bec­omes more tolerant and multi­cultural, some of us feel con­fusion and estrangement as we are ex­pected to succ­essfully interact with people from more varying cultural backgrounds—and may be sha­med as racist if we fail to comply. When social move­ments adopt more profound comm­unication techn­i­ques (such as Art of Host­ing and Theory U), people can easily feel drawn in farther than they had ex­pected or wan­t­ed. When spiritual and “self-development” comm­unities create more in­ti­mate ways for people to share their inner lives, some feel pressured to over­share and end up having their intimate secrets used against them.

When we feel alienated, we seek reintegration. Metamodern politics, and the listening society, must empower people to reintegrate the parts of life that have been spli­ced into shards: the personal, the civic and the profess­ional. We must be allowed to live as whole human beings. We need to live fuller lives. We need to be able to show up as a vulnerable, real per­son at work, and do work that is meaningful to us in terms of our values and views of society.

But the dark side of deeper reintegration of the spheres of life—the per­sonal, the civic and the profess­ional—is the emergence of new and more subtle forms of oppre­ssion. Integration is necessary for more com­plex soc­i­eties to function, but it can always, sooner or later, become contro­lling or even icky and creepy.

This is the tragedy at hand: a painful wheel turning from integration, to oppression, to resistance and eman­cipation, to greater dividuation and alienation, back to new integration.[i]

The different political strands of mainstream Western politics relate to different parts of this wheel of dividuation and integration. None of them have successfully identified the whole process.

Socialism is largely an integrative movement, seeking to create greater integration by means of democratically governed bureaucratic measures, working against alienation—beginning already with the pre-Marxist soci­a­lists. Libertarianism and neoliberalism defend the rights of the individu­al against oppression, but they largely lack an understanding to balan­ce out the alienating eff­ects of mod­ern society and its way of turning every­thing into a matter of money, material gain and calculated exchange.

Fascism and populist nation­alism can be viewed as integrative over-reactions to the alienation of modern society, seeking to revive obsolete forms of community and belonging (corresponding to earlier value mem­es). And ecologism is larg­ely an inte­grative movement, seeking to re­inte­grate human life into the biosphere and often into local comm­uni­tarian initiatives.

The metamodern view is to support the necessary reintegration of high­ly dividuated modern people into deeper community—or Gemein­schaft—but to do so with great sensitivity towards the inescap­able risks of new, subtler forms of oppression.

Hence, the task is to balance out and support the forces of inte­gra­tion and dividuation. This is what the listening society must be able to do.[ii] Nobody said it was going to be easy. But there it is: The increasing intimacy of control is linked to higher personal freedom, though in a diffi­cult and pain­ful manner that easily spirals off into oppression. We must relate prod­uctively to this dynamic.

See the model below for a graphic summary: 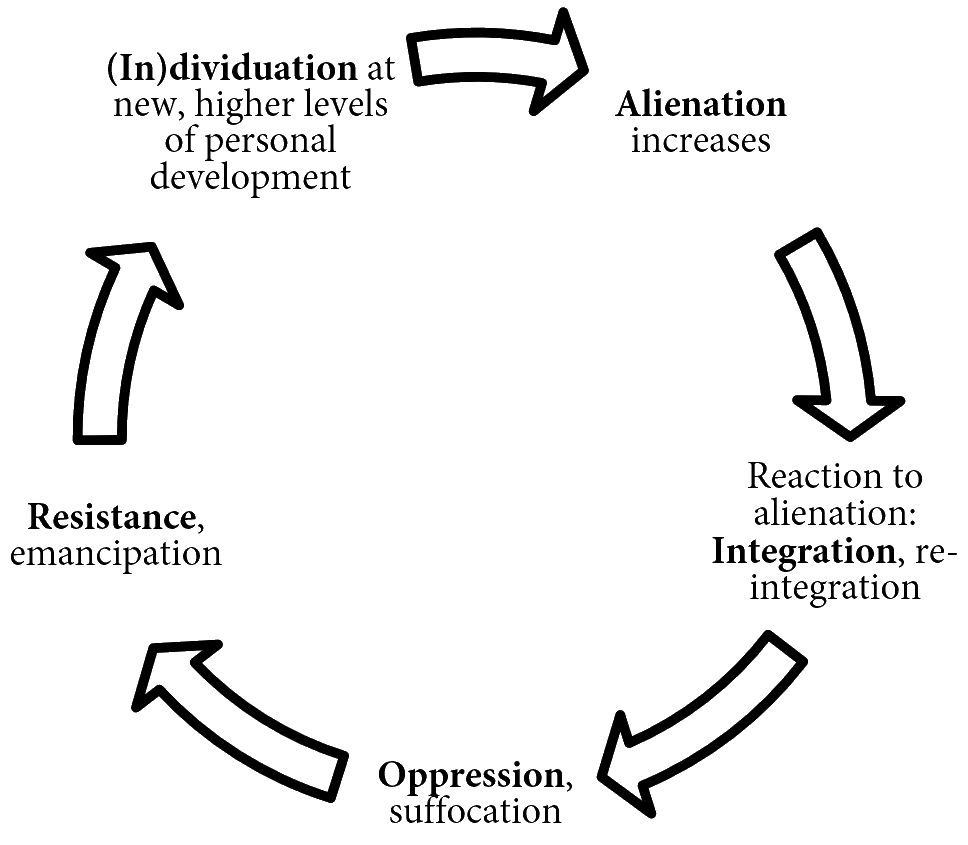 If things go well, the turning of this wheel—for all the pain and com­plication it involves—leads to higher freedom, to a profound kind of soc­ietal pro­gress. We dividuate as people and integrate in more complex ways, and this changes the nature of society, which in turn affects who we are as human beings. If it goes poorly, it leads to oppression and/or alien­ation—and sometimes fierce overreactions against these.

[i]. All of this is interspersed, of cour­se, with periods of disintegration and conform­ism, when things fall apart and people revert to earlier stages of development for a period of time—and by renewed resistance and struggle. Far from all emancipation and integration projects are successful and sust­ain­able.

[ii]. To make matters more complicated some authors, like Daniel Siegel, use the word “integration” to mean both differentiation and linkage. In this vocabulary, then, integration is the overall process whereas its two components are differentiation of different elements and their interlinking. The way I use the term, it is juxtaposed with differentiation.