In this investigation of the Alt-Left position we have looked at some general stances, economic thinking and the general political and cultural ideas that differ from what we have somewhat meanly called “the Old Established Left”. The point is that this new form of progressive thinking is needed due to the failures of the Left to adapt to the changes of the global, digitalized world-system and its postindustrial centers. But all of this flows not only from an analysis of our time, but also from more fundamental shifts in perspective. In this post we take a look at some of these shifts in general perspective and how they create a platform for a new form of politics.

So let’s connect the dots. The Alt-Left only appears in history at a point where a critical mass of people begin to think, feel and breathe the digital age and have become intimately acquainted with the confusions and adversities of life in a postindustrial economy where the class interests of old make less sense.

It is also a matter of philosophical development: there need to be philosophers and social theorists who work out the ideas: Deleuze, Žižek, Wilber, Barad, Capra, Bard & Söderqvist, the postcapitalism of Mason, the metamodern understanding of art and culture by Vermeulen, van der Akker and others, complexity and chaos theory applied to social science and economics, the self-psychology of Siegel, theorists of the peer-to-peer economy, the sociocratic form of organizational management, and so forth.

Without going into detail with these diverse and partly contradictory strands of thought, let us just take stock of some simple points that can be garnered as an overall perspective from which an Alt-Left can flow: 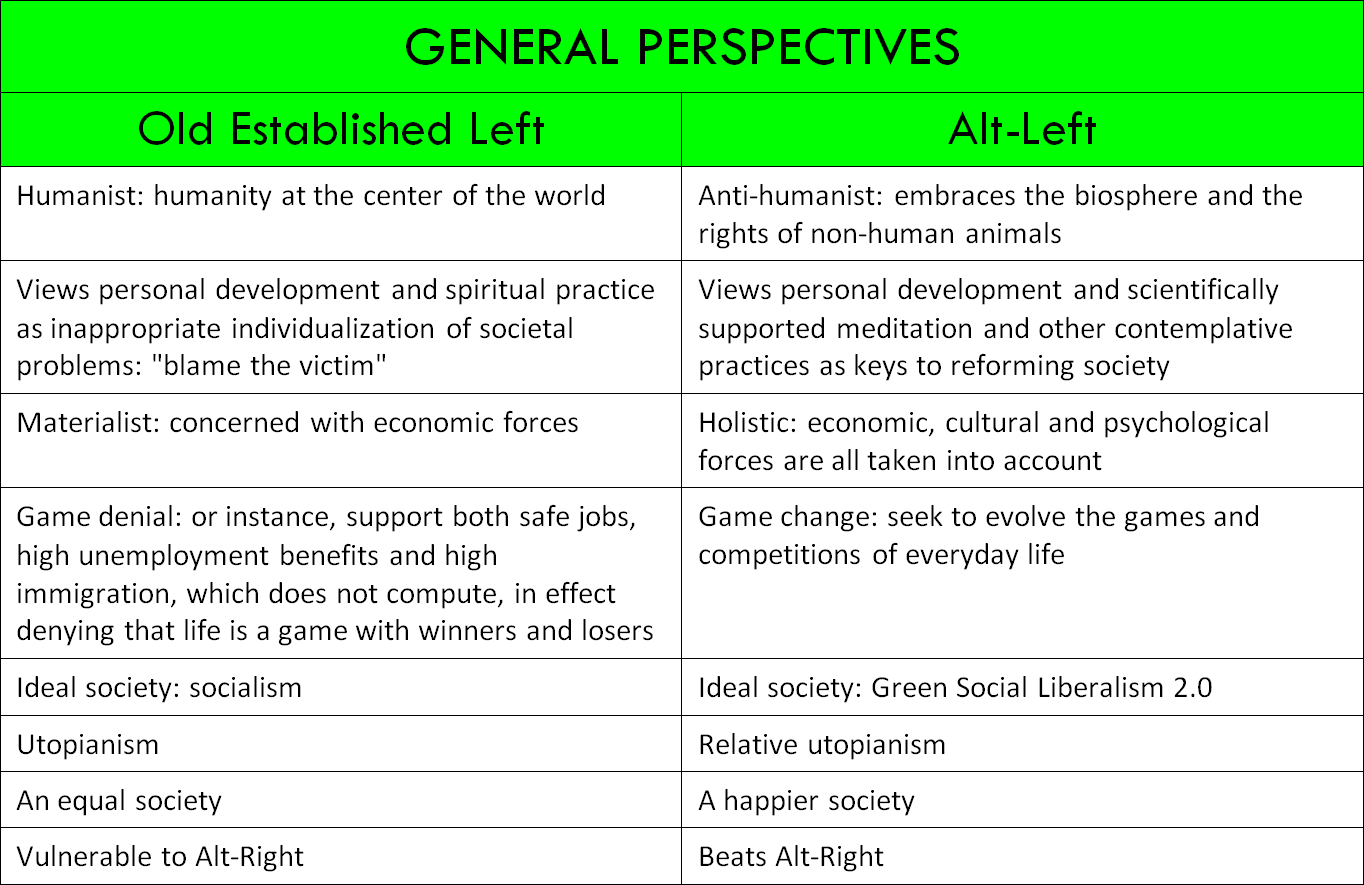 “The Alt-Left is based upon an anti-humanist perspective.”

The Alt-Left is based upon an anti-humanist perspective. This can mean several different things. Most importantly, it simply means that you break away from the anthropocentric worldview, i.e. that humanity is seen as the center of existence. Since Nietzsche, we have seen a line of progressive thinkers who argue that we cannot really make a rational argument that delineates humanity from the rest of existence. Foucault noted that any attempt to once and for all bolt down “a nature of man” can only be met with a philosophical laughter. In our days you have ideas such as Manuel DeLanda’s “flat ontology”, in which human realities are not seen as any “more real” than those of other living creatures or even physical objects. And you have a wider family of ideas such as “posthumanism”, in which humanity is itself viewed as a fleeting, malleable and political category – and transhumanism, in which humanity is seen as just a step on a wider range of the development of consciousness, one that will inevitably be biologically transformed by applications of technology, in effect merging with technology in various ways.

If we no longer take humanity’s primary importance for granted, it becomes impossible to argue that only human interests should be the aim of politics. This leads us to some of the developments of deep ecology, in which the biosphere is taken as the basic political unit. Perhaps more practically applicable is the thinking that involves the interests and rights of animals – from Peter Singer’s arguments in Animal Liberation, to Gary Francione’s abolitionism (seeking to “abolish” animal slavery) and developments of thinking in animal rights, such as in the critical leftwing sociologist Corey Lee Wrenn’s development of these thoughts and the psychologist Melanie Joy’s exploration of how people justify the exploitation of animals.

The next point is to view psychological development as key to reforming society. If humanity isn’t really a static category, this also means that humans can develop and change: we can become more complex thinkers, more far-sighted, begin relating to more subtle and existential aspects of life – and we can become healthier and happier. All of these things have been studied in adult development research (which reveals that people are at different stages of development), positive psychology and meditation research. The point is that the institutions of today are hardly geared towards supporting such growth; but they certainly can be. Creating the frameworks for such psychological development can be more productive than growing the economy and redistributing its spoils.

To see the inner dimensions of life and society leads us away from a materialistic worldview and towards a more holistic one. For instance, if someone becomes richer, how will they use their wealth? That depends on such things as personality, norms, emotions and relationships. Even the greatest material security and comfort can be insufficient if our ability to experience life in full is dulled. Even the fairest distribution of material goods might produce miserable lives if people’s relationships are not of sufficient quality. Cultural and psychological forces can topple governments and wreck economies. Subtle shifts in people’s values and emotional intelligence can save billions of dollars – and, in extension, millions of lives.

The idea here is to change the games of everyday life, so that everyday life itself becomes “richer”, more forgiving, kindlier. To do that you must first admit that there is a game of life and that competition is an inescapable part of existence. Hence, it is necessary to go beyond the “game denial” that often plagues the Old Left. For instance, you can’t have both very free immigration and high starting wages and safe jobs because the situation quickly becomes unsustainable. Rather, you can work towards a system in which global migration is as free as possible and jobs are fairly paid and relatively safe. This, in turn, becomes much easier if people’s needs and psychologies are more developed.

The ideal society, then, is not necessarily “socialism” in the classical sense – even if we strive towards a society that would qualitatively feel like socialism was imagined: free, fair and secure. But the society that has been emerging in the most progressive countries looks a lot more like a “Green Social Liberalism 2.0”. This means that society should be far to the Left and far to the (libertarian) Right, and be ecologically sustainable. We might imagine a balance where people have guaranteed basic income but where work in not taxed, and taxation is levied from consumption, ownership of land, taking rents and making profitable transactions.

This is not “utopianism” in the sense that our ideal society would actually be devoid of major problems and miseries. It is only a “relative utopia”, in which many of the problems of today (poor mental health, excessive inequalities, environmental degradation, animal slavery) are dramatically reduced. Of course, there will be new challenges.

A central issue is to loosen the fixation upon equality and start working for well-being or happiness. There are, of course, many complex relationships between the two. Often economic inequality can be detrimental to happiness. But is certainly not the only source of human and animal misery. The social games of everyday life contain many more mechanisms of violence and harm that must be addressed.

Last but not least, the Alt-Left is less vulnerable to the Alt-Right than the Old Left has been. This is because it actually supports a program that would incrementally increase people’s quality of life in the postindustrial, digitized and global age. The Alt-Right offers a path backwards, to nostalgia. The Alt-Left offers a path forward: towards a listening society.