When all is said and done, politics very often comes down to the economy. Any self-respecting political current must first and foremost hold opinions and perspectives on how the economy functions and how it can be developed. In this post we take a look at some of the economic thinking of the Alt-Left.

The main difference between the Old Left and the Alt-Left is that the latter focuses more on the cultural, behavioral and psychological sides of economic life. In a world where material resources are relatively abundant and information and information processing become dominant in economic life, money begins to matter less than e.g. cultural capital, good social relations and access to high quality information. What is lacking is not stuff, or money, but intelligent solutions for distribution, value creation and ideas about what to do with our lives in the first place. To create a fair and sustainable global order we must create better social settings for people to do worthwhile things.

We have already stated that this entails a “betrayal of the working class” (read previous post in this series). What do we mean by that? Basically it means that the Alt-Left loosens its ties to the worker movements and the interests of labor (higher wages, safer employment, benefits, consumption and so on). Simply put, the greatest problem of the world is no longer that working and middle class people make too little money. Many of the problems that come from poverty and economic precariousness are – upon closer inspection – in fact social and psychological problems. In the most developed countries people aren’t literally starving or freezing to death. But they are being stressed out, alienated, frustrated, treated poorly, manipulated by advertisement and getting stuck in destructive social relationships. Increasing people’s incomes and consumption can be a way of remedying these maladies, but it is far from the only way. And a too strong focus on material wealth does not only blind us to other means of improving people’s lives; it also perpetuates an overall system of production and consumption that is not ecologically sustainable.

So here are some distinctions between the economic perspectives of the Old Left and the Alt-Left, respectively: 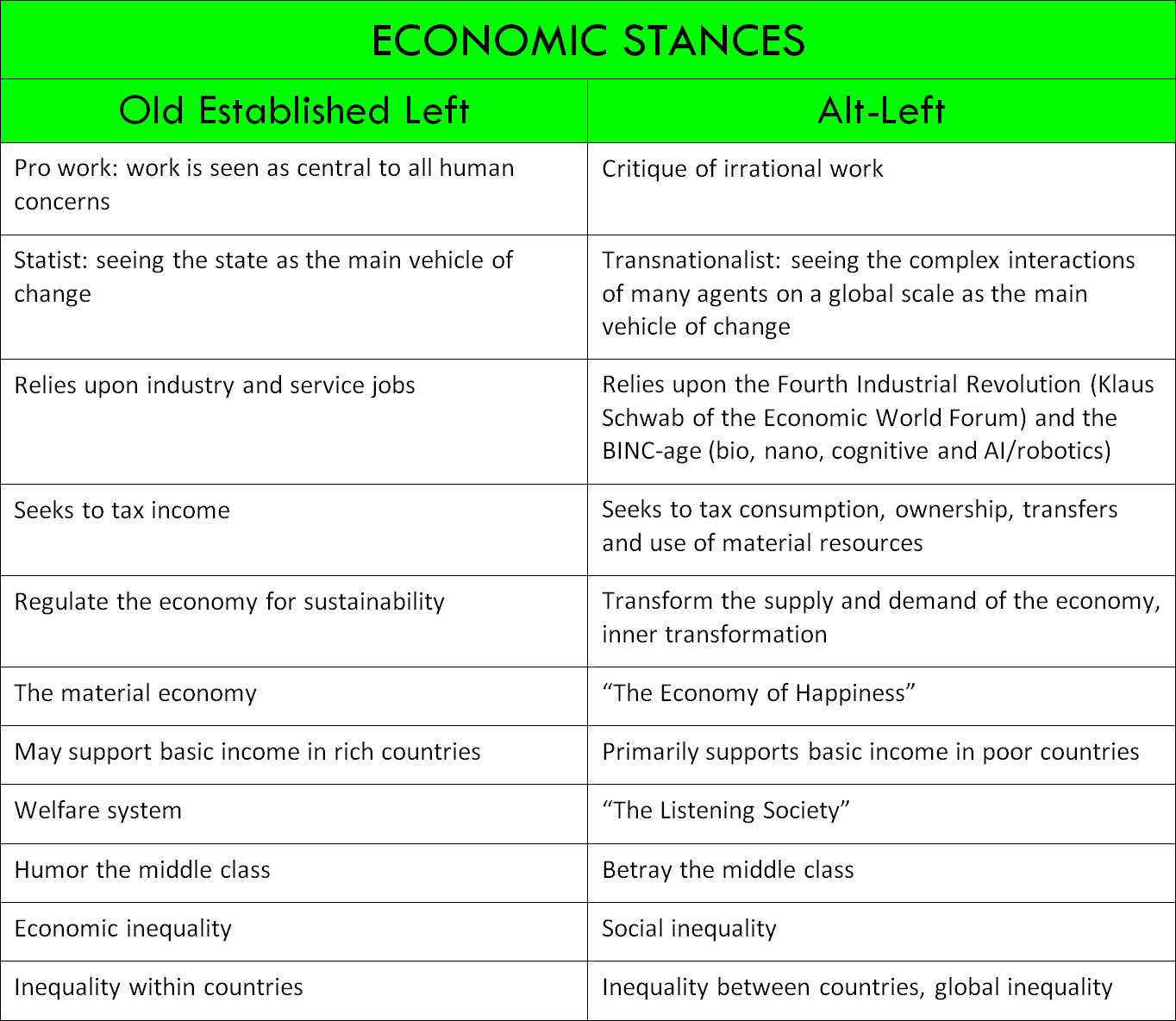 “Because it has this transformative view of economy, culture and society the Alt-Left is the most radical of the current political positions; more radical, I would argue, than anarcho-communism.”

Of course, there is more to unpack here than we can manage in one post, but let’s do a quick tour.

The first point is that the Alt-Left is generally critical of labor. Far from all work is good work. There is really no reason to romanticize people’s work. Often a person can do more good for the world by staying home from work, consuming less, staying healthy and nurturing her relationships than through her active participation in the labor market. A lot of the work, while providing an income, may in fact do more damage than good on a systemic level. Let’s say one person works in the meat industry and another is unemployed but is a socially engaged vegan. Which one creates most utility, seen in a systemic perspective? The meat industry of course tortures and exploits animals, but it also contributes to food resources being used inefficiently (you have to feed the animals with crops, you know), it is highly detrimental to the environment and contributes to a wide range of health problems. At a surface level, it looks as though the employed citizen is doing good for the economy and the unemployed vegan bum is not. But if you look at the overall value added, the relation is in fact the opposite. Or what about a politician who works really hard, but generally defends regressive and unproductive ideas? Or a slick advertisement professional who plays on people’s insecurities and desires? Or just a telephone salesman? All of these arguably do greater harm than the beggar on the corner. Even if these may all be good people who, at an individual level, live okay lives, they may all be doing more harm than good at a systemic level.

So we may have to shed our loyalty to “labor”, and start looking at how labor – and all human activity, economic or otherwise – can be developed: in terms of consumption, production, transport and distribution.

This leads us to a more behavioral, cultural and psychological view of humans and our participation in the economy. Can we have greater psychological comfort and thereby have less urge to splurge on clothes and cars? Can we buy more services and less goods? Can we be brought to think more critically about what our businesses do in the world? What our public services do? These are issues of cultural and psychological development. For instance, meditation may seem like a waste of time and good GDP; but if it contributes to fulfilling human needs in a more efficient manner, is it not a net gain? This is where the concept of the “Economy of Happiness” comes in; what may seem like a loss to the material economy may well turn out to be a net gain in the “Economy of Happiness”, i.e. that the distribution of people’s life experience is improved.

The “Economy of Happiness” creates the greatest justification for “The Listening Society”. Whereas the Old Left successfully created the welfare state it has not produced a new, corresponding, project for the increase of security and wellbeing in the general population in a postindustrial, digitalized and global setting. The Listening Society, which you can read about in my upcoming book with the same title, is a more complex form of welfare which deliberately seeks to improve the mental health and inner wellbeing of all citizens. This may include such services as psychological support, training in emotional intelligence at schools, paid sabbaticals for the 40-year crisis, active development of organizations and leadership, curbing of excessive advertisement and so forth. Say what you will, these are not “centrist” positions; they are Alt-Left positions.

We should strive for an economy in which rational, long-term human activities are promoted and generated. And this may well require people to divide their time and attention in manners that don’t fit very well into the categories of the conventional labor market and economy. This is one reason that we should, in the long run, seek to lower – or even remove – taxes on labor and move them to consumption, ownership, rents, transactions and use of natural resources. People should pay not for working but for using finite resources and for having privileged positions of power in the economy.

Finally the Alt-Left must be based upon world-centric values. The Old Left has unfortunately been bogged down by the confines of the nation state, and often explicitly puts the interests of the local working class over the equally real interest of the world’s bottom billion (people living in abject poverty). From a world-centric perspective this can only be seen as unethical. Hence, the Alt-Left must sometimes go against the interests of the large groups in rich countries in order to create a more equitable global economy. This means, for instance, that consumer goods may become less cheap in Walmart, but be produced under less appalling circumstances; that we may have to pay for recycling our own computers rather than leaving it to children in Ghana, and so forth.

Because it has this transformative view of economy, culture and society the Alt-Left is the most radical of the current political positions; more radical, I would argue, than anarcho-communism.

The next post in this series will investigate the Alt-Left’s stance on culture and politics. Stay tuned!